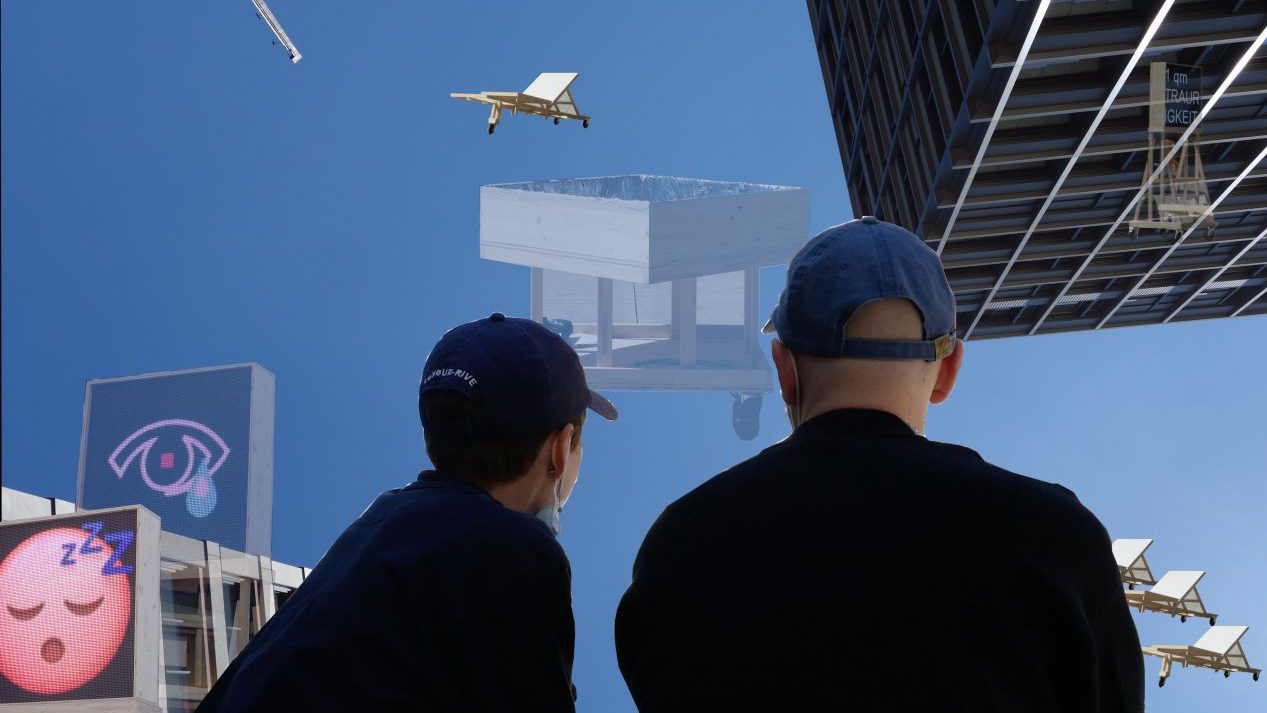 1.
Nah am Wasser gebaut (Built close to the water) is the title of an art project.
The art project takes place in the city of Bremen.
There is a large new development area at the old harbour.
The quarter is a new place to live and work.

The art project has three parts:
At the beginning, we do actions on the street of the new quarter.
We do the actions with three wooden companions.
Other people happen to walk past them.
People can watch the actions.
But they can also participate.

Then there is an event in the new development area.
An event is: a show play, a parade, an installation, a performance.
People come to see it.
The theatre in the city advertises it.

The end will not take place until next year.
The art project is no longer outside, but inside.
Inside is: a stage in a theatre.
In the theatre we reinvent what we experienced outside in the new development area.

2.
The new development area is also something we only imagine.
We call it a metaphor.
A metaphor is an image in our head.
For example: You are as beautiful as a flower.
Or: This place is like hell.
Or: I am built close to the water (This means in German also: to be prone to tears)

The picture about the new development area has two sides.
One side looks beautiful.
All the people want to live in the district.
People think:
I will be happy.
Everywhere is safe.
Everywhere is clean.

The other side of the picture is not nice.
All people feel unsafe.
All people work too much.
Nobody can control themselves.
People think they are alone with their feelings.

3.
In Nah am Wasser gebaut we dress up as Insecurity.
Insecurity is like a security company, only much less secure.
As Insecurity, we make the Neubau district unsafe.

By the way: Nah am Wasser gebaut will soon be available on the internet.

A production of Die Soziale Fiktion in co-production with Schwankhalle Bremen with FREISCHWIMMEN-Plattform für Performance und Theater.The project is supported by: Fonds Darstellende Künste with funds from the Federal Government Commissioner for Culture and the Media, Lower Saxony Ministry for Science and Culture and Stiftung Niedersachsen. Thanks to Gewoba Bremen.